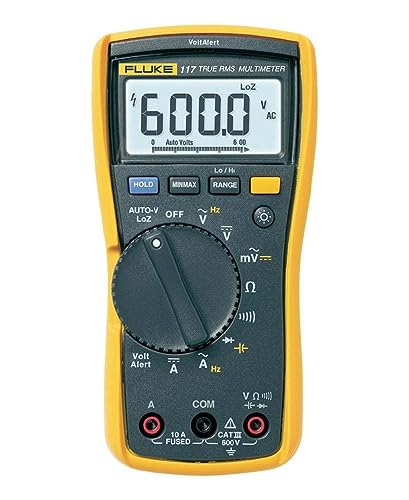 The Fluke 117 True RMS multimeter is a member of the Fluke series of multimeters.

It has distinctive features that make it a highly suitable multimeter option for demanding settings and buildings like hospitals, schools and other commercial environments.

Apart from the voltage, resistance, current and measurement capabilities, the Fluke RMS multimeter also has the ability to measure frequency and capacitance. Although cheaper than most multimeters like the 87 V, it still functions equally well in measuring electric currents and voltages. It allows for measurement of a diode and even the current path. If you are looking for the best multimeter, this one will definitely serve you well.

Let’s have a critical look at the overall qualities of the multimeter, pointing out its features, pros and cons… 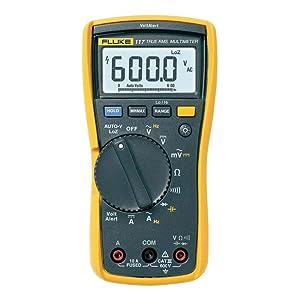 The Fluke 117 RMS multimeter is an electrician’s design multimeter built in the USA. It is substantially smaller than other Fluke meters and weighs only 400 grams. This model is also ergonomically designed to provide you with an easy and compact hand grip while operating it. It has a salient non-contact detection feature which helps to prevent secondary voltage detections by other tools. The electrician’s Fluke 117 RMS multimeter also features true RMS for accurate detection on non-linear loads.

One of the most important features of this model is the low impedance measurements which is highly valuable for preventing inaccurate readings due to ghost voltage. There are features like the large LED display with white backlights that works well in areas with poor lighting.

The Fluke RMS 117 has a min/max/average feature that records fluctuating signals and it also comes with a volt alert which detects non contact voltages.

Other features of the 117 meter include CAT II 600 rated safety, compatibility with optical magnetic hangers for hands-free operation and a 10A measurement with a 20A overload within a period of 30 seconds. With all the features, it is quite amazing that it is sold at a very affordable price compared to other similar products.

There are just two reported negatives…

This is a budget multimeter for most electricians.

It is important to note that given its inability to measure milli amps and micro amps, it might not be suitable for all types of electrical appliances. However, for DIY electricians and other professional electricians, this model will definitely do the job.

It is a good investment for electricians who are involved in commercial operations.

If you are looking for a low budget multimeter for simple electrical jobs, there is no better option than the Fluke 117 True RMS Multimeter model.

Purchase this on Amazon.com!

About the Author Damion